Not Just Kid Stuff: Falls City Sixpence FALLS in Love with its Comminuty and Helps the Whole Family Create Change! 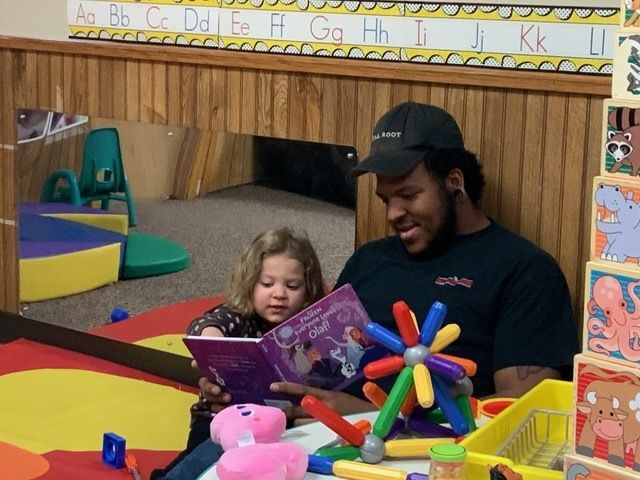 When Susan originally met up with a family who enrolled in the Sixpence program, they were living in a low-income apartment unit. The family had goals they wanted to share with Susan.

As a home visitor and an early childhood development expert, Susan is highly trained to support families in meeting their children’s developmental needs. But Sixpence home visitors don’t only support children; they help families set goals too.

“We were working with the whole family to set goals,” said Susan. “They just couldn’t come up with anything at that time. I was giving them some ideas as a family [as to] what they could work towards. Such as a stable job for dad, mom completing her GED,” said Susan.

Susan said that the father was working through a temp agency on an on-call basis, but the current schedule wasn’t a stable form of employment. He was ready to find a reliable source of income, and Susan was there to help.

“I told them, ‘I will start by helping to watch for jobs and send you the information and prep you for the phone call and interview.  I will pretend to interview you for any job, if you want me to,’” said Susan.

A few weeks went by; Susan sent the family any suitable job ads that she discovered. The father remained in touch, calling her, and applying for jobs.

Finally, he received some promising news and was selected for an interview at a dog food plant about 30 miles away from where he lives.

Susan said that the father initially felt resistant to the interviewing process. Although her offer to conduct mock interviews with him still stood, he resisted practicing as he felt unprepared.

Still, the father interviewed and got the job! Susan said that he promptly responded and met his new schedule and demands with enthusiasm.

“He was put on the second shift, which [had] him leaving home at 1:00 pm, and getting back home at 9:00 pm most days,” said Susan. “Some days, he worked the overnight shift, but he didn’t seem to mind. He seemed very proud of himself because he was working and taking care of his wife and daughter.”

The family (above) enjoys developmentally-stimulating activities with their daughter.

As time went by, the father began to tire of the long commute. On his own, he decided to apply for a job at a plant in the town where he lived.

Once again, the father’s proactivity created great results. “He got the job and was working day-shift hours. He was so proud of this. Things were really falling into place,” said Susan.

“As the home visitor, I talked to them about setting some new goals since they were meeting those. Mom wasn’t ready to pursue her GED just yet, so we are giving her some time on that goal,” said Susan.

Still, she had other ideas to bring to the table; her next one included a housing change. Again, the family was unsure about this proposition.

Home visitors like Susan (above) forge lasting, strong relationships with not only children, but the whole family.

“So, I asked them if they ever thought about moving out of public housing? [The father] looked at me like I was crazy. This young man has never, in his 20 some years of life, ever lived anywhere but public housing,” said Susan.

While the father contemplated the prospect of moving from his current home, Susan still gently provided some supportive options.

“I told them we can take it slow, but we can look into it. First, we need to set a budget, save money for deposits, and look for a rental house that is nice but affordable,” she said.

Once again, the family hesitated. This time, however, they didn’t say no.

“They told me they would think about it,” said Susan. Shortly thereafter, she was met with a pleasant surprise.

“When I went back the following week, they wanted to set a plan in place. I suggested they call the utility office and ask what a deposit would be, start looking for a rental, and then talk to the landlord and find out about those deposits,” said Susan.

Susan kept her word to the family that they would gradually move forward with this ambitious goal. After the family had researched potential deposits and rentals, Susan said they could begin to set a budget and start a savings plan.

From there, slow, steady, and determined won the housing race! For the next six months, the family continued to press on, followed their budget and put money aside for a new rental. Again, their hard-won efforts paid off.

Families who work hard thrive! Here Amethyst, (above) their daughter, is happy and healthy.

“This is what they did, and within six months they were moving into their first rental house out of public housing,” said Susan.

When the big moving day came, the family paid a special someone an equally special visit.

“Who did they come and see on moving day? ME!” said Susan. “The father pulled up at my office, jumped out of his car, and said ‘I had to tell you first. Today is moving day and I just wanted to thank you so much for believing in me. ‘”

Sixpence does important work at an important time: the ages 1-3 are a child’s most developmentally productive time.

Moments like these for Susan and Nebraska Children remind us that Sixpence doesn’t only support parents as their child’s most important first teacher. This program also assists families with living their best lives. Susan agrees.

“So, long story short, Sixpence is a whole lot more than just teaching parents how to work with their children. We work with the whole family, we make connections, we help people grow, we try really hard to help them get off of public assistance. We believe in them and show them that they can do anything that they set their minds to.”